Would you get a Star Wars tattoo? (Star Wars Week)

As it is the very week that Star Wars: The Force Awakens is released, I thought that I would post a few cheeky blog posts that are Star Wars related. I am thinking ‘Top 10 Things About Star Wars’, a review on Star Wars Battlefront and my Star Wars tattoos post (this one!).

I know that a lot of fans actually get Star Wars tattoos plastered all over their bodies, but the real question is, ‘Do you love Star Wars enough to get it tattooed on you for life?’

So, without further ado here it goes.
I never thought that I would become a tattoo sort of person, it literally never came to my mind when I was younger and never looked up to people and thought ‘I’m going to have one of those one day’ – but my brother became a tattoo apprentice when he was 17/18 (I was 14/15 years old) and has had his own studio and business for the last 6-8 years.
I guess that being around the tattoo studio when I use to work on the desk there and it being a family run business, I just became interested in tattoos but I could never decide on what to have..

For me, tattoos have to be personal to me and I cannot just get anything that I like at the moment in time. My first tattoo was an anchor, a swallow and the letter ‘F’ for my grandfather Francis that passed away when I was a teenager.
My second one was a jigsaw piece that had birds flying out of it, which to me represented my family when you might lose some pieces of the puzzle but although they are gone and the puzzle doesn’t fit anymore, there is always more opportunities in life for additional puzzles.

Anyway, getting back onto the subject of Star Wars..
After these two tattoos, I could not think of something that was so ‘me’ apart from Star Wars, as I have always grown up with it from a very young age. So I delved in and decided to get my R2-D2 thigh piece that says ‘Am I the droid you’re looking for?’. 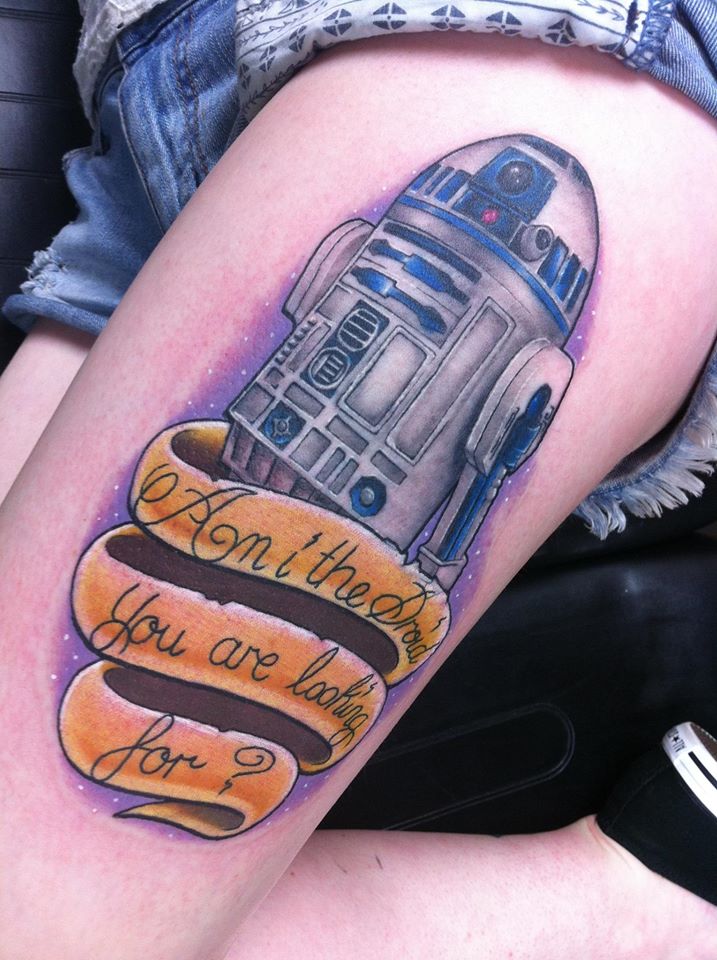 I then somehow ended up getting another Star Wars related tattoo, which was on my shoulder blade. I got C-3PO and had some roses around him to make the theme a little more girly on my skin, just to have a feminine touch. This then ended up expanding all the way across my back, and now this contains C-3PO, Admiral Ackbar and Yoda.
(I will post a photo on my complete back, when I find one!)

I thought that this could be the end of my Star Wars tattoos, but I was wrong. I thought that I could possibly expand my back a teeny tiny bit more with possibly a Jawa or Ewok in there, but I ended up getting an ankle tattoo of Boba Fett who is just completely bad ass!